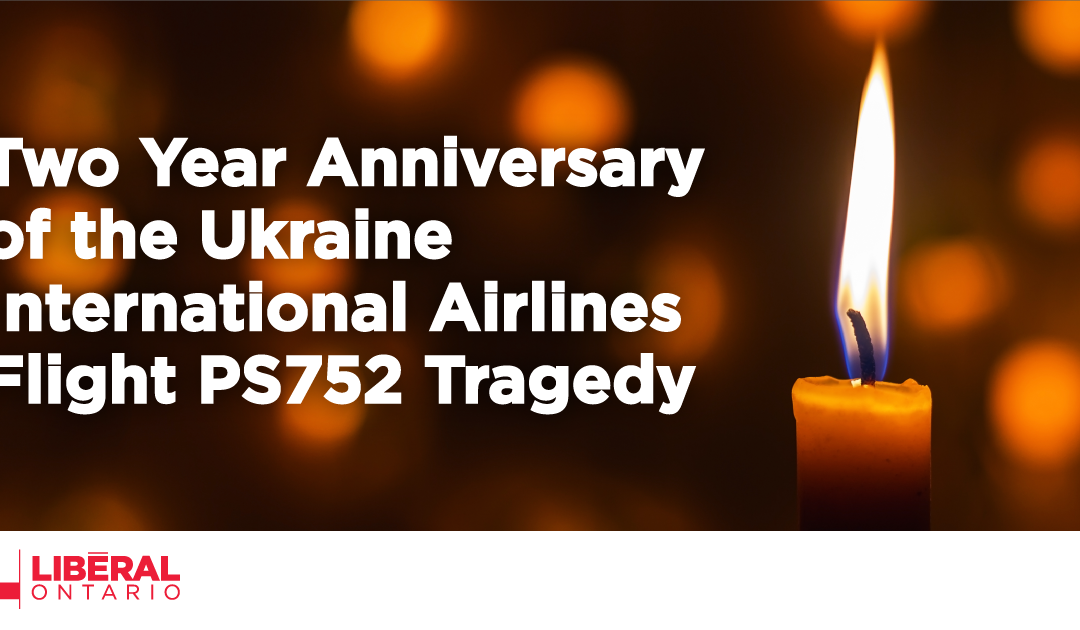 “Two years ago today, Ukraine International Airlines Flight PS752 was shot down by the Iranian regime, resulting in the tragic loss of 176 innocent lives.

As Canadians, we have a responsibility to support the families of those we lost, and to continue our fight for justice.

Ontario Liberals have and will always
fight to hold those responsible for the downing of Ukraine International Airlines Flight PS752 accountable.

January 8, 2020, inflicted great pain on our country, and that is why today, and everyday, we stand together to mourn those who perished, and promise that they will never be forgotten.” 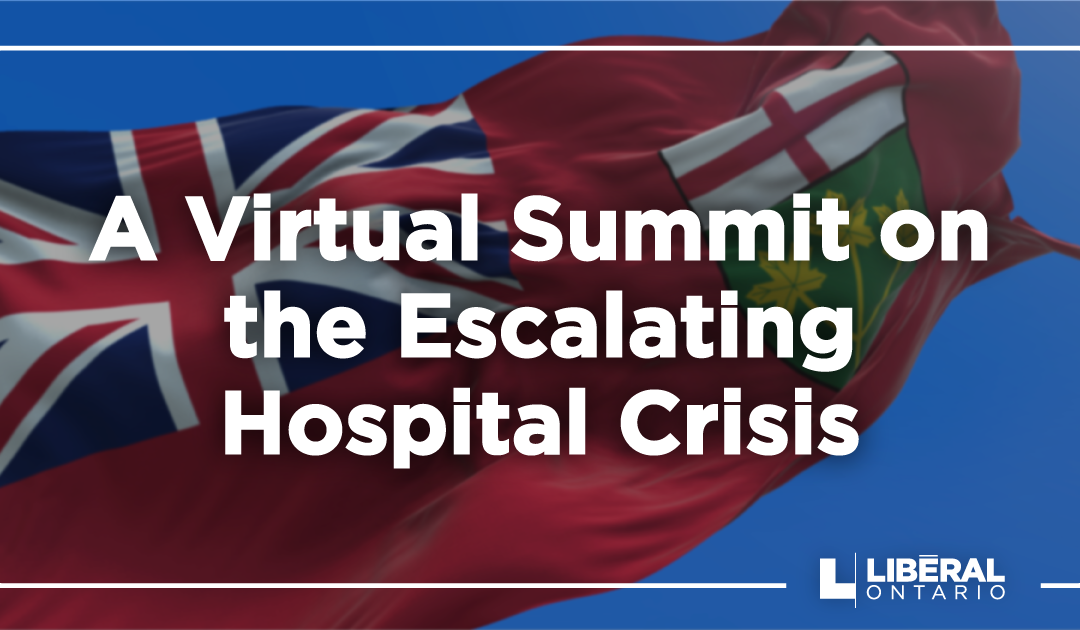 TORONTO – Ontario Liberal Leader, Steven Del Duca has invited healthcare and political leaders to a nonpartisan virtual summit on addressing the hospital staffing crisis, and to discuss a unified plan on how to immediately shore up capacity.

“The crisis in our hospitals requires an all-hands-on-deck approach,” stated Ontario Liberal Leader, Steven Del Duca. “I sincerely hope all political leaders will attend this summit to hear from those on the frontline of our hospitals. Our vaccine certificate summit in August helped guide the province in the right direction on that issue, so it’s time to put partisanship aside and work together.”

“Hospitals have never been as full and staff have never been stretched as thin,” added Del Duca. “We need to listen to Ontario’s best and brightest doctors and nurses, and those with healthcare expertise, who understand what’s happening on the frontlines.”

Ontario is currently suspending 8,000 to 10,000 surgeries every week due to the crisis. Ontario Liberals recently called for a number of constructive emergency measures to address the staffing shortage, and hope to build on that list using suggestions from the healthcare leaders in attendance.

“This is about being collaborative and constructive to get us out of this crisis. I have written to each of the three other party leaders and I sincerely hope they attend on Monday. Ontario families need us to work together during these difficult moments.” 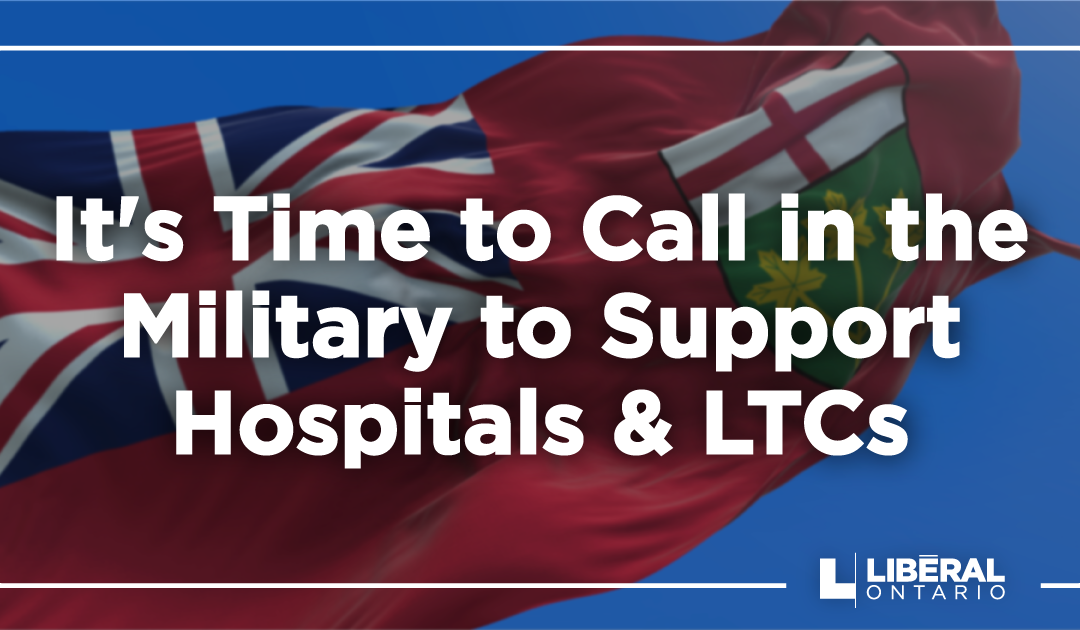 TORONTO – Ontario Liberals are demanding that Doug Ford takes urgent action today to resolve the staffing crisis in hospitals. With 8,000 to 10,000 surgeries being postponed every week, Doug Ford’s refusal to act has caused an emergency in Ontario.

“I have heard from healthcare heroes telling me stories from the frontlines about how shocking the current situation is given how long Ontario had to prepare,” stated Ontario Liberal Leader, Steven Del Duca. “Because of Doug Ford’s failure to take any preventative action before the fifth wave became a tsunami, and nurses being driven out of the profession by his anti-nurse government, we are facing an unprecedented staffing shortage that requires immediate action.”

Ontario Liberals are demanding that the following emergency measures be implemented, and say they can’t wait until next week:

“Doug Ford’s recklessly incompetent response to the fifth wave has caused a crisis in our hospitals,” added Del Duca. “This can’t wait until next week or the week after – Doug Ford needs to get back to work and start trying to mitigate the disaster he caused right now.” 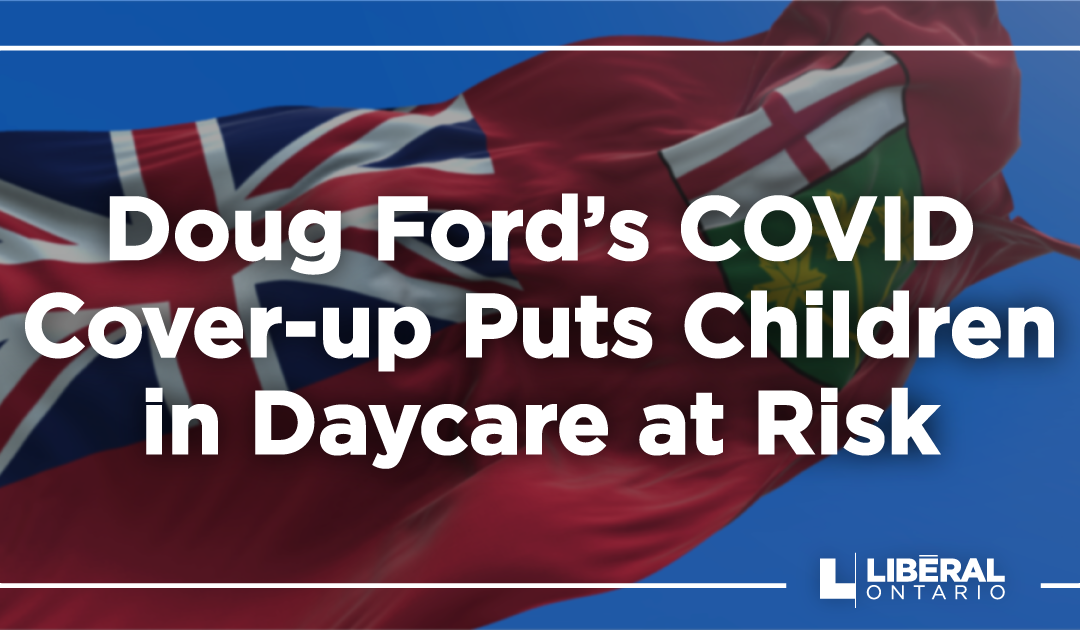 TORONTO – Ontario Liberals are fighting back against Doug Ford’s COVID cover-up. Refusing to report on case numbers in childcare and education is putting our children in danger.

“Children in daycares are still too young to be vaccinated and must be protected from the fifth wave,” stated Ontario Liberal Leader, Steven Del Duca. “Instead of doing everything he can to make daycares safe for children and early childhood educators, he is covering up the mess by refusing to report case numbers in childcare or schools.”

“Children and early childhood educators in our daycares don’t have access to the PPE or tests that our schools are getting, but they face the same risks. Doug Ford needs to get PPE and tests into daycares immediately, and stop hiding the number of COVID cases.”

“We already know schools aren’t safe to reopen because Doug Ford closed them yesterday, but daycares are still scheduled to open this week. His COVID cover-up is only causing parents more anxiety during this incredibly difficult time.”

Ontario Liberals released a strong plan to battle the fifth wave in November, weeks before Omicron was first detected. Doug Ford ignored those measures and now schools are closed and daycares are being left unprotected.

“I am demanding that Doug Ford immediately ends his dangerous COVID cover-up and resumes reporting of case counts in schools and daycares,” added Del Duca. “Covering up the crisis by hiding the number of cases is just a reckless attempt to save the Conservative re-election campaign.” 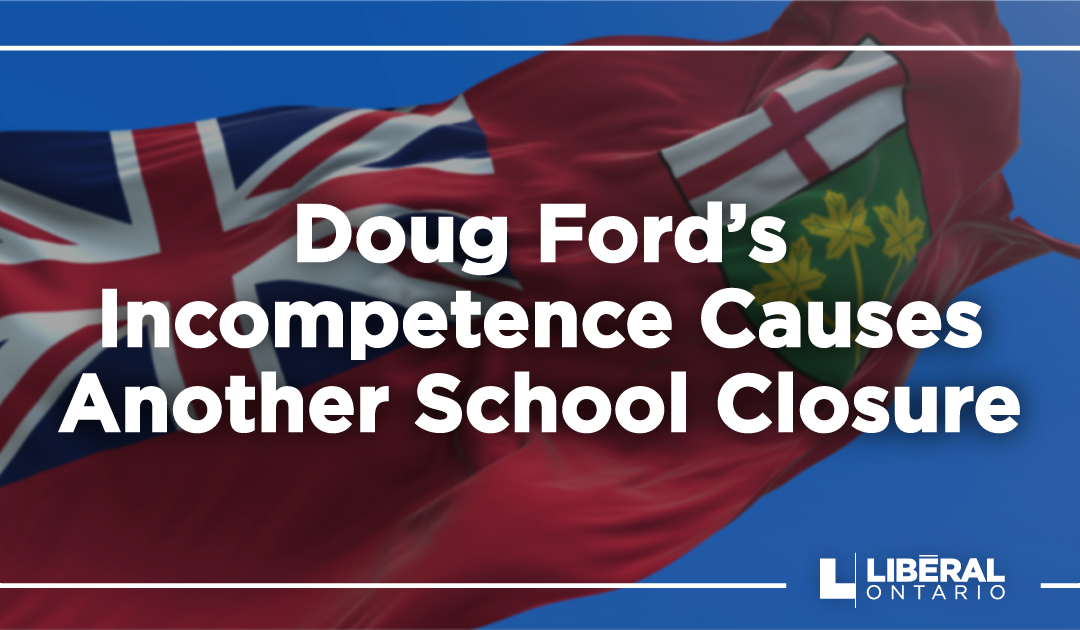 TORONTO – Ontario Liberals are slamming Doug Ford for doing virtually nothing to keep schools safe, leading to yet another closure. Just days ago Ford told parents that schools were safe to open, and not even a week later he has been forced to backtrack.

“Our kids deserve so much better than the constant chaos of Doug Ford’s reckless leadership,” stated Ontario Liberal Leader, Steven Del Duca. “This is another brutal blow to our kids, who were looking forward to their first normal school year of the last three.”

Ontario Liberals have called for a number of proactive measures, including rapidly deploying HEPA filters and N95 masks in schools, issuing strong vaccine mandates for frontline workers, prioritizing education workers for booster shots, creating a rapid testing program in schools, adding the COVID-19 vaccine to the list of required vaccines for students, and launching a public education campaign to help boost vaccine confidence among parents of school age children. Doug Ford ignored those measures and his failure to act has caused another closure.

“As a dad with two daughters attending publicly funded schools, I know how important peace of mind is right now,” added Del Duca. “Telling us last week that schools were safe to re-open on Wednesday and then reversing that decision on Monday is only scaring parents who were already anxious.”

Del Duca will hold a series of telephone town halls over the coming days to listen to the concerns of parents. 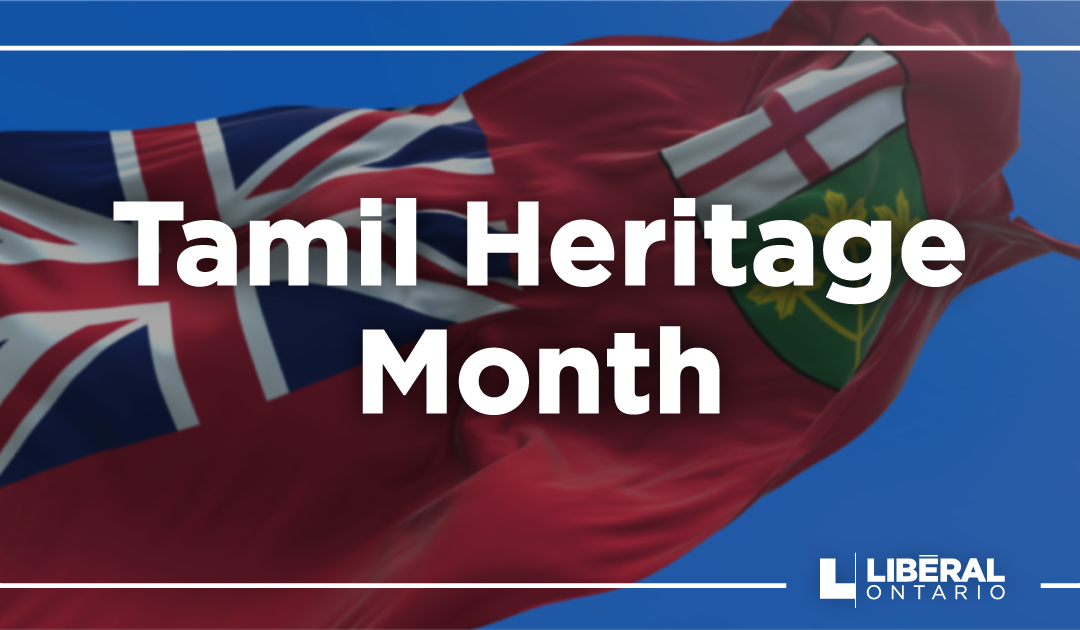 “Each year in January, Ontario celebrates Tamil Heritage Month, a time for us all to recognize the Tamil community’s spectacular achievements and accomplishments right here in Ontario.

Tamil Ontarians have dedicated so much to help make Ontario a better place for everyone, and there is no greater example of this than those from the Tamil community who selflessly stepped up to keep us all safe during the COVID-19 pandemic. Whether it was working on the frontlines or helping administer vaccines, we can all be grateful for this immense dedication and service.

While celebrations this month will once again look different because of the pandemic, I know that the Tamil community will continue to find new and unique ways to celebrate, and I look forward to once again participating during this important time of year.

On behalf of myself and the Ontario Liberal Party, I want to wish everyone a very happy Tamil Heritage Month!”