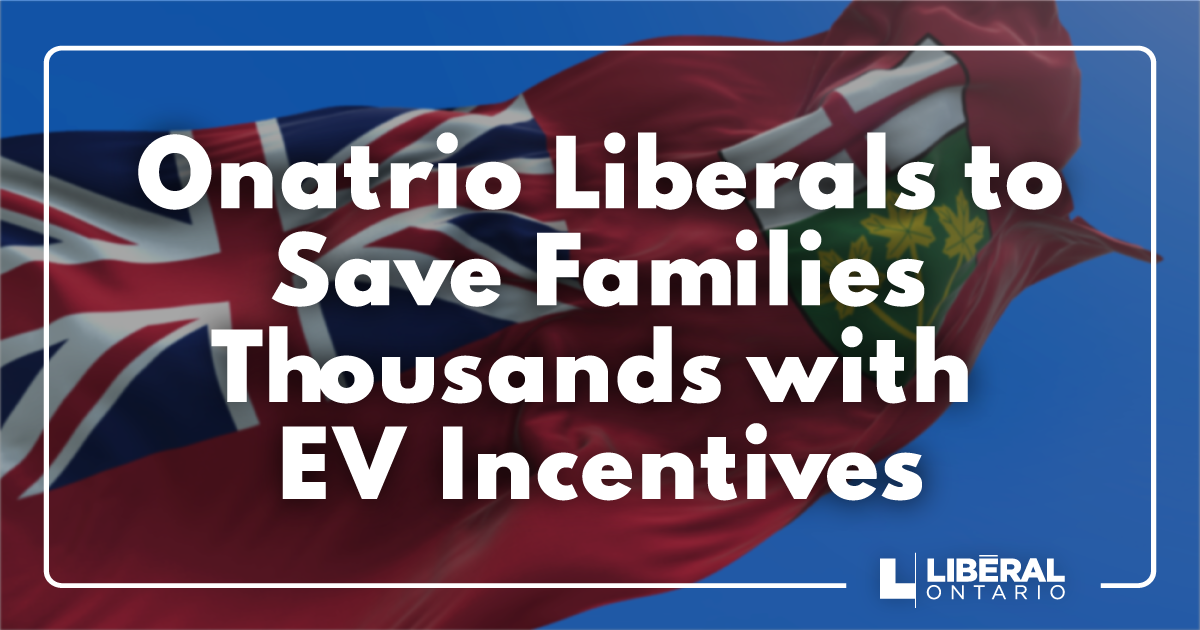 TORONTO – An Ontario Liberal government will undo the cut Doug Ford made to Ontario’s incentive programs for electric vehicles by providing families up to $8,000 on the purchase or lease of eligible zero emissions vehicles and $1,500 on charging equipment, Liberal Leader Steven Del Duca said today.

“Electric vehicles are the future it’s long past time the provincial government helped Ontarians make the move to protect themselves from the rising cost of gasoline. An Ontario Liberal government would ensure Ontario is again a leader in the fight against the climate crisis,” Del Duca said.

“Doug Ford’s Conservatives hit drivers twice, not only did Ford break his promise to cut the gas tax by 10 cents, but they also made it harder for Ontario drivers to choose the long-term cheaper and cleaner option of electric vehicles over their gas-guzzling alternatives,” Del Duca added.

The Ontario Liberal Electric Vehicle Incentive would save families up to $8,000, on the purchase or lease of electric vehicles (up to $55,000 MSRP for a vehicle of 6 seats or less and up to $60,000 MSRP for 7 or more seats, mirroring Transport Canada’s list of vehicles eligible for the federal rebate) and up to $1,500 for charging equipment.

Ontario Liberals will also help rapidly expand the availability of vehicle charging stations in apartment buildings, workplaces, parking lots, city streets and all OnRoute and GO stations across the province. Ontario Liberals would do this by providing a 30 per cent subsidy for building charging infrastructure through a new provincial investment.

EV sales in Ontario fell 55 per cent in the first half of 2019 after Doug Ford’s cuts ended Ontario’s previous EV incentive program.